This exhibition celebrates the friendship and influence of the pact between Margaret Olley and Donald Friend. Organised by Jane Watters (S.H. Ervin Gallery Director) with assistance from Margaret Olley, the exhibition comprises over fifty paintings and drawings from collections across Australia.


The love of field and coppice,
Of green and shaded lanes,
Of ordered woods and gardens
Is running in your veins.
Strong love of grey-blue distance,
Brown streams and soft, dim skies -
I know but cannot share it,
My love is otherwise.

I love a sunburnt country,
A land of sweeping plains,
Of ragged mountain ranges,
Of droughts and flooding rains.
I love her far horizons,
I love her jewel-sea,
Her beauty and her terror –
The wide brown land for me!

The stark white ring-barked forests,
All tragic to the moon,
The sapphire-misted mountains,
The hot gold hush of noon,
Green tangle of the brushes
Where lithe lianas coil,
And orchids deck the tree-tops,
And ferns the warm dark soil.

Core of my heart, my country!
Her pitiless blue sky,
When, sick at heart, around us
We see the cattle die –
But then the grey clouds gather,
And we can bless again
The drumming of an army,
The steady soaking rain.

Core of my heart, my country!
Land of the rainbow gold,
For flood and fire and famine
She pays us back threefold.
Over the thirsty paddocks,
Watch, after many days,
The filmy veil of greenness
That thickens as we gaze.

An opal-hearted country,
A wilful, lavish land –
All you who have not loved her,
You will not understand –
Though earth holds many splendours,
Wherever I may die,
I know to what brown country
My homing thoughts will fly.

On this continuously updated website you will find information on these activities and preliminary details on the exhibition as well as current print products and background information on the three curators. To learn more about the previous berlin biennials, please consult the history section. A list of links focusing on the art scene of Berlin can also be found here.

The 4th berlin biennial for contemporary art is a project of the KW Institute for Contemporary Art.

Taking its title from a poem by 18th century Scottish writer Robert Burns – who also inspired John Steinbeck’s 1937 novel of the same name – Of Mice and Men stages a theater of the absurd, in which animals, humans and ghosts all play their tragic parts. But it is also a day in life of the inhabitants of a street and a stroll along the spaces that punctuate our existence.

The exhibition, Of Mice and Men will include more than 60 artists spanning four generations and working in a variety of media and techniques from etching to woodcut, animation to still photography, role-playing to team building. Unlike the prevailing biennial tendency to debut the latest talents and movements, this show draws connections across time and throughout the past and present, rather than just concentration on the fleeting trend or tastes. And the context within the heart of the city of Berlin brings with it the undeniable weight of countless histories and manifestations, triumphs and failures.

Berlin has a long tradition of co-opting and transforming existing buildings and structures into venues for temporary art shows. Every day in Berlin an artist turns his or her apartment into a gallery or opens an independent exhibition space. Learning from this experience, the curators recognize the specificity of Berlin’s art scene and the vast quantities of unoccupied space. That space is both a blessing and a curse: it offers up exciting and fresh venues for presenting art, however it also symbolizes the failures and consequences of the city’s powerful and persistent memory and history.

The berlin biennial is the only biennial in the world that changes locations and venues according to the exigencies of the exhibition. Of Mice And Men will thus become a strange carnival or street fair, following a jagged descent into the spirals of time.


Not much to categorise for a month of travel.

The Churchill Fellowship program provides financial support to enable Australian citizens to travel overseas to undertake an analysis, study orinvestigation of a project or issue that cannot be readily undertaken in Australia. 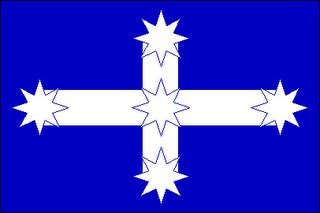 I was in Glenrowan the other day visiting Ned Kelly's last stand, and they were selling copies of the Eureka flag. It occurred to me that the Eureka Flag would be a good rallying point for artists wishing to protest the anti-sedition legislation.

"The potential impact of the proposed new Anti-Terrorism legislation on artists' freedom of expression is extremely worrying, especially Schedule 7 dealing with 'sedition'", says Tamara Winikoff, Executive Director of the National Association for Visual Artists. NAVA, along with creative and visual arts organisations, have been active in a call for action seeking the removal of the Sedition Clause from the Bill. A Senate Inquiry into the Anti-Terrorism (Nom 2) Bill 2005 is underway. NAVA's submission to the Inquiry follows. For more info see Craft Australia

The paragraph "self censorship" in NAVA's submission reads

"With the risk of this kind of treatment and the seriousness of the potential consequences, self-censorship is the likely course of action for many artists, galleries and other art organisations. For fear of possible misinterpretation of their work or abuse of power by government or police, artists and galleries will be under pressure. The result could be the stifling of free inquiry and expression with a consequent quelling of expression of opinion, censorship of any perceived form of dissent and the resulting blandness of contemporary cultural production."

One artist has recently received media attention for a work which challenges the anti-sedition laws by use of the Australian flag. see
http://www.sa.org.au/9913.htm

"A statement released today by Trocadero Art Space indicates the work was removed by Footscray Police on Friday 20th January following "numerous complaints from the community."

This is not the first controversial work by this artist whose agenda appears to be more about gaining attention by offence, than the politics he purports to have. http://www.theage.com.au/articles/2004/05/13/1084289821310.html

Unfortunately there will be many who support this case without first taking the time to research the artist concerned.

On this Australia Day let us reflect.

Glasgow International, the city’s curated and commissioning Festival of Contemporary Visual Art,is set to take place for a second year from Wednesday 19 April – Monday 1 May 2006.

For 2006, Glasgow International is set to build on the success achieved in 2005 and will continueto provide an international platform for Scotland’s thriving visual arts industry.

Under thecuratorship of Francis McKee, Glasgow International will host exhibitions that have beenspecifically developed for the festival in addition to further collaborations throughout the citythat will reflect Glasgow’s capacity to exhibit internationally significant visual art.

Over 28,000 visitors came to the inaugural Glasgow International which was held between 21 Apriland 2 May, 2005. Glasgow International presented over 150 artists in 29 exhibitions, installationsand artists events that highlighted new work either specially commissioned for the festival orbrought to the UK for the first time. Featuring highlights such as The Jumex Collection, BarbaraKruger, Smith/Stewart, Jake & Dinos Chapman and Douglas Gordon, the 2005 programmedemonstrated the commitment of artists and organisations across the city to create something trulysubstantial.

Glasgow International’s 2006 full programme launch will be announced in February. To receiveupdates please register on the website http://www.glasgowinternational.org

Short St. Gallery is a small gallery located in the heart of Chinatown in Broome, Western Australia.

It is an old building (over 100 years) and is the last remaining house with a wind tunnel. It is an important part of the Aboriginal, Malay & Japanese history in Broome.

The gallery seeks to educate and proudly show the stylistic diversity of the different cultures which make up the Kimberley and Australia. From the saltwater to the freshwater, to the desert people, Short St. offers a glimpse at the extremely sophisticated dynamic landscape which is Australian art. 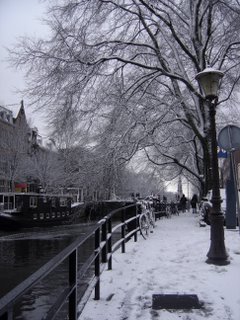 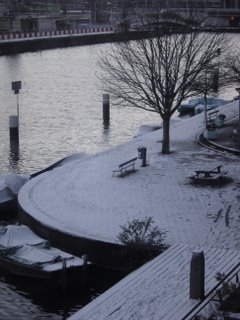 It snowed on boxing day.